Chances are if you’ve played at any jam with intermediate to advanced players, you’ve heard someone talk about a 1 4 5 progression or “this song goes to the 6 too” etc. If you don’t understand these phrases, well it’s time to change that!

The Nashville Numbering System essentially assigns numbers to notes in a given key. By calling each number by the function it serves in the key a song is in, players can easily change keys without having to think too much – which is awesome when learning songs on the fly or having to change keys for a singer. This system is easy to understand – so it’s worth taking some time to explain.  The below chart shows the number for each note in all keys – though for simplicity I did not specifically list the enharmonic spellings (like how Gb is also F#). 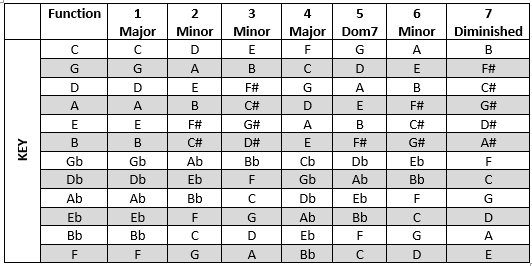 You’ll see that I included how to harmonize a major scale along with the function (i.e. 1 being Major, 2 being Minor etc). While knowing how to harmonize a major scale is important as it’s a common tool used, it’s far from the rule.  Many songs have major 2’s and 6’s – which is perfectly fine (for example Old Home Place has a major 2, Salty Dog Blues has a major 6). Remember, there’s no absolutes in music – just a bunch of guiding principals which get broken frequently and eventually become stale anyway.

For bluegrass (and blues, folk, rock, and many other genres) the 1 4 5 progression makes up the majority of songs in some way. When learning this system, start off memorizing the 1 4 5 in each key. When I was learning this, I used flash cards where one side had a Key and the other had the 1 4 5 of that key which worked really well.

Some common progressions to know:
1 4 5 – aka “the people’s progression” Common base of most songs like Foggy Mountain Top, I’ll Fly Away, Will the Circle Be Unbroken, and Hand me Down my Walking Cane.

1 4 1 5 1 – aka “church cadence” Very common progression in tunes like Bury me Beneath the Willows, Deep Elem Blues, If I should wander back tonight, and My little girl from Tennessee 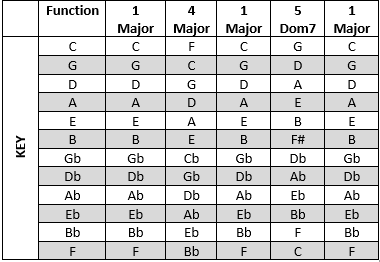 2 5 1- aka “jazz turnaround”  A jazz turnaround that gets used in bluegrass more than you might think.  Songs like Old Home Place, Lady Be Good, Whiskey Before Breakfast, and Salty Dog Blues all use this (some use the more “full” 6 2 5 1 progression too)